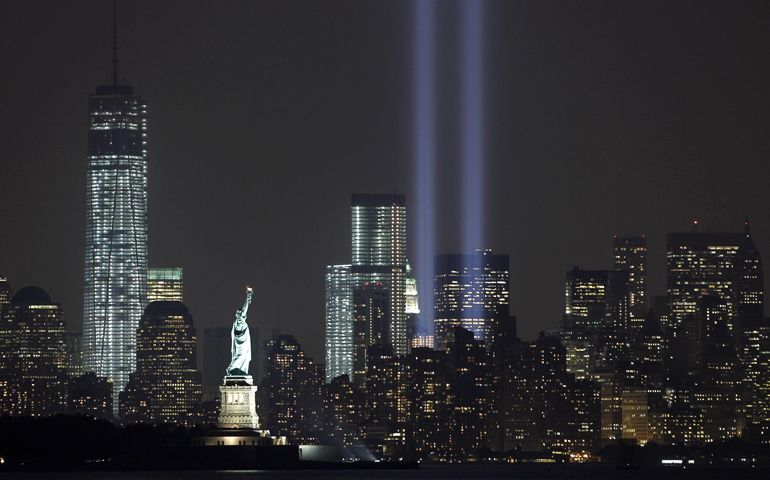 I thought about writing something pertaining to pop culture today like I usually do, but that just didn’t feel appropriate.

It’s been twenty years since the attack of 9/11. At the time, I was just nine years old–a fourth grader in Mr. Keeler’s class. I had just walked into the classroom and dropped my backpack by the wall where I usually did. The TV was on. The TVs were hardly ever supposed to be on at school, only during class when the teacher was showing us something like Bill Nye or National Geographic. But the TV was on this morning, and there was a smoking building on display.

Like an idiot kid, I asked, “Cool, what movie are you guys watching?”

Mr. Keeler, in his patience, coldly and seriously said, “It’s not a movie.”

My heart dropped. Even as a nine-year-old, I knew that somewhere far away, people were getting hurt.

It’s been twenty years now, and I’ve grown to understand the significance of that day a little more. On the morning of September 11th 2001, over 2700 people died–a senseless and horrific attack planned by people whose only mission was to destroy. It hurts my heart. It makes me angry and confused. Why would someone want to kill so many innocent people? They hadn’t done anything wrong. These attackers didn’t know them. Why all the blind hatred?

Maybe that’s something I’ll never understand–and maybe that’s a good thing. And I wish there were more happy notes that I wanted to write in this piece, but if I’m honest, there aren’t. I’m just sad. I guess this is just me inviting you to join me in “mourning with those that mourn” on the anniversary of one of the saddest days in American history.

I don’t know what we can do to rid the world of this kind of hate, but if there is, we must do it. I’ll be thinking of ways I can help, and I hope you do, too.

If you’d like more information on the 9/11 attacks and the events that followed, please watch the Netflix documentary Turning Point: 9/11 and the War on Terror. If you’d like to learn more about the victims of the attack, study the 9/11 Memorial & Museum at https://www.911memorial.org/.