WW84 Has Problems. Lots of Them. 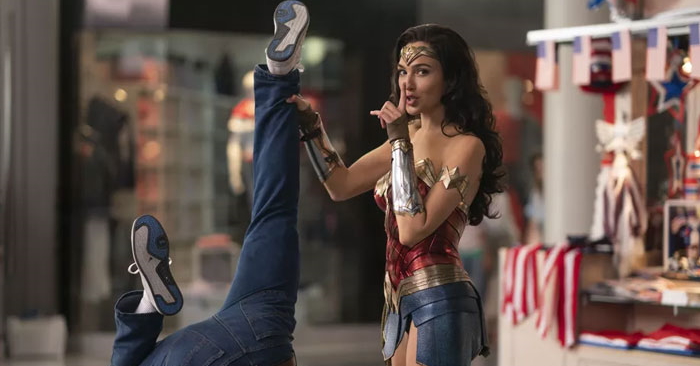 Patty Jenkin’s Wonder Woman was fabulous back when it hit theaters in 2017. We all agreed it was the best movie in the DC Cinematic Universe up to that point (if you don’t count the Dark Knight trilogy). It was a superhero movie that didn’t do anything astounding or terribly new, but checked all the boxes for an entertaining flick with a rad female lead. DC has had a hard time producing anything to match it since. So how does its sequel, WW84, hold up?

The answer: not well. Not well at all.

Set in–you guessed it–the year 1984, Diana works at a museum and masquerades as Wonder Woman, saving people from a variety of dangers on a daily basis. She’s barely aged a day since the events that happened in WWII where she lost her beloved Steve. And now, in 1984, stuff is happening. Bad stuff. I guess. But it doesn’t get super bad until like two-thirds of the way into the movie. So whatever.

Look, I don’t like trashing movies because there are a lot of moving parts in filmmaking. Literally thousands of people and hundreds of millions of dollars need to come together just right to make a movie good. That’s tough. But WW84 brought me too many moments where I wanted to sit down with the screenwriter and ask him what exactly he was thinking. It shouldn’t have been as much of a mess as it was.

**WARNING: SPOILERS AHEAD, BIG AND SMALL**

Pedro Pascal is the shining star here. Honestly, he was probably pumped about showing his face in the wake of an Emmy-award winning TV show that kept his head covered about 99% of the time. He plays the villain Max Lord with charisma and bravado, and you can tell he cares a lot about giving this role all that he’s got. Hats off to Pedro.

Kristen Wiig was solid, too. I might or might not be in love with her from her work at SNL and I was anxious to see her tackle a dramatic role. She proved to us that she’s got the chops. Her work as the quirky nobody Barbara Minerva comes across the strongest in the first third of the film. She did a solid job with the lackluster script she was given.

The sequence of Steve trying on different 80’s outfits was amusing. I’m glad he landed on the Nike Cortez sneakers. Those are fire.

Let’s get this out of the way first: NO REAL SENSE OF CONFLICT WAS ESTABLISHED FOR NEARLY 1.5 HOURS. That’s a huge narrative blunder. The two things you want to do in the early onset of your story are to 1) establish the stakes for the conflict at hand and 2) make promises to your viewer that you intend to keep. Neither of those things happened. Let’s elaborate on that just a tad, though.

With establishing your stakes, you have to have a hook. The writer James Scott Bell says that every conflict should be rooted in the threat of death, whether it’s physical, social, spiritual, what have you. There’s none of that in WW84 until Max Lord starts going crazy with his power halfway through the movie. Until then, people are just kind of living their lives without any real threats.

With making promises, you want to create loose threads at the beginning of the film that will be tied up by the end. In the opening sequence, we see a childhood Diana take a shortcut to win a race and she gets scolded for it. That’s a character flaw of cutting corners. Not bad. And throughout the movie, it’s never brought up again. Maybe the wish-granting plot device has something to do with that, but it’s execution was flimsy to say the least.

The script is riddled with those kinds of mistakes. It felt like Patty Jenkins was handed the first draft of a script that had some interesting potential, but Warner Bros was so eager to get this movie produced that they didn’t allow this script to go through the revisions it desperately needed. It doesn’t help that the guy they hired had worked on Aquaman, The Flash, and Arrow previously. That’s why a lot of the movie feels like an overblown CW show.

Let’s talk about the special effects and fight coordination: they weren’t good. The opening mall sequence was cringy and every movie goer can spot at least three special effects shots that should have gotten more attention. That’s all I’m going to say.

Since I don’t have the patience to write about all the other problems with the film, here’s a bulleted list:

What did I say? Problems. Lots of them.

WW84 is a mess. The writing lingers somewhere between clunky, aimless, and melodramatic. Too many questions are left unanswered, and things that don’t need explaining are explained anyway. Pedro Pascal and Kristen Wiig do the best they can with a script that didn’t do them any favors. Overall, this is a dull and disappointing sequel in the hands of a director that could have done so much more.