My first pack of Pokemon cards in 20 years 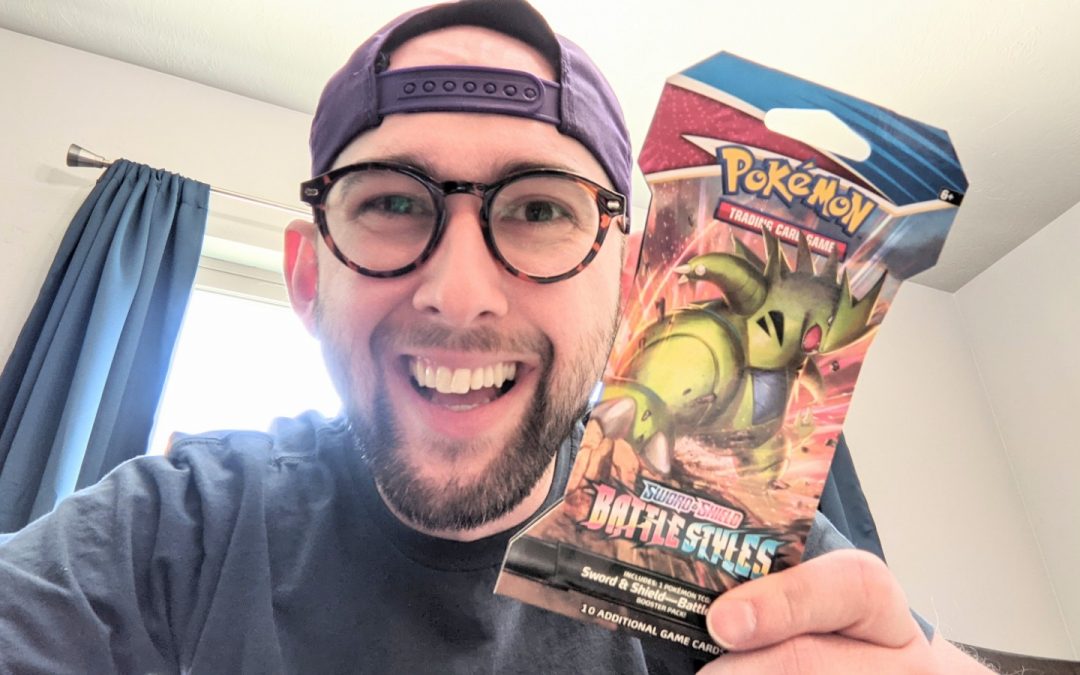 Back when I was in elementary school, Pokemon was the thing. The question was “Are you Red version or Blue version?” and every kid worth their salt had a Walmart binder stuffed with cards. It was almost a form a currency, and certainly a form of status. Kids got in fights over them, stole them, openly wept in class after realizing they made a bad trade during recess…

Me. That last one was me.

Anyway, that was like a zillion years ago and miraculously, Pokemon is still going. New games are still being developed, new iterations of the show are still on the air, and those colorful little slabs of cardboard are still being produced.

(By the way, I played New Pokemon Snap it for a little bit. And it’s okay. As a photographer, I wish it was more of a free roam structure and that I had the ability to manipulate the elements of exposure… but that’s a little much to ask, so I get it.)

I was talking to my buddy Cole the other day when the subject shifted to Pokemon cards that we used to collect. I was on my way to the store as I listened to him recount stories of his cardboard-collecting excursions, and I thought to myself, “You know what… I’m gonna buy a pack of Pokemon cards. I want that thrill again. I’m gonna do it.”

So I did. Here’s my review.

BaCk In My DaY… Pokemon cards came in a very basic plastic sleeve. The sleeves were usually packed into a long cardboard display on a store’s front counter so a cashier was in punching distance of kids with sticky fingers. Nowadays, it’s a little different. At the store, I had to go to a specific checkout line and ask the cashier for a pack of Pokemon cards because they were behind the counter. Then he limited me to one per purchase because apparently Pokemon cards started selling like crazy during the pandemic. But I got a pack. It set me back a whole $4.18, so I think my bank account will eventually recover.

These things are in cardboard shells now! I had to undo the shell so I could reach the plastic sleeve inside! Honestly, I’m not even upset. The extra layer made it feel a little more sacred… like cracking open a pistachio’s shell to reach the delicious inside. But the inside is cardboard. So don’t eat it.

I would like to note that it was refreshing that the plastic sleeve still looked the same. Shoot, I even enjoyed that it was kind of hard to open, just like the ones from 1999. I had to peel apart one end and slip my fingernails into the crack just right to peel it open and dump out the cards. And inside, there were 11 freshly minted Pokemon cards waiting just for me.

I didn’t even recognize half of these Pokemon because I gave up after second generation, but I saw some familiar faces!! I nabbed a holographic Steelix for the rare card (hit me up if you’re interested in buying, will trade for an Xbox Series X or a Tesla Model S), Mr. Mime, Cubone, Zubat, and a Spearow! The pack also included a trainer card, an energy card, and a voucher for digital versions of the cards I got. Kind of cool.

Was it exciting to open this to see what was in store for me? Absolutely. Was it nostalgic and delightful to hold these colorful, thin cardboard slices and admire them one by one? Again, absolutely. Would I do it again? Eh, probably not. It was a fun one time thing. But I’m a big kid now.

If you collected Pokemon cards, shoot, you should go out and buy another one just for old time’s sake. It was fun–definitely worth the four bucks. The only problem is I don’t really know what to do with them now, so maybe I’ll just use them as fun bookmarks. Or give them to people at business functions instead of actual business cards. That would definitely be more entertaining, at least from my end.

Still looking for my Charizard, though. One day… one day…