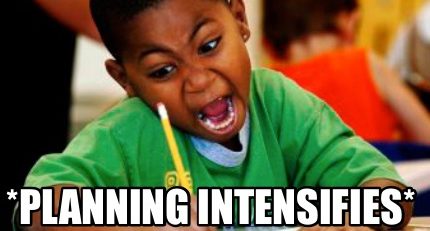 As I’ve written and rewritten this post, I keep feeling like I’m not getting my point across. No matter how I reword things, I feel like I could say it better. I told this to my roommate Adam and he said, “That’s a big writer mood.” Ain’t that the truth? That being said, please bear with me.

According to the world-renowned fantasy writer Brandon Sanderson, there are two types of writers: outliners and discovery writers.

Outliners are the ones who like to plot out the entire book from beginning to end. It’s all written down. Every twist and turn and every minute detail. Some well-known outliners are Orson Scott Card and J.R.R. Tolkien. Did outlining pay off for them? Well, you’re looking at the arguably the best sci-fi writer and indisputably the greatest fantasy writer of all time, so, yeah. I’d say so.

On the other hand, discovery writers don’t really outline much at all. They come up with the idea for the story, then just kind of let the story evolve and let their imagination put things together as they go. Hence the term, “discovery”. Some well-known discovery writers are Neil Gaiman and Stephen King. Both very prolific writers with dazzling careers and volumes of bestsellers, so discovery writing is working pretty well for them.

One isn’t better than the other. They’re just different. And depending on the writer, they’ll tend to gravitate toward one or the other.

As for me, I’m somewhere in the middle. I’d say 60% discovery writer and 40% outliner. I always start a book with a bulleted outline. I map out things from beginning to end the very best I can. But inevitably, the book doesn’t turn out the way I expect because I let the characters do their thing instead of follow my outline if it feels right.

And that complicates things.

If I was a pure outline writer, everything would be mapped out flawlessly from beginning to end. But nope. My brain likes the thrill of discovering the story just a tad more, which makes every aspect of world building and story planning more difficult. Sigh.

This causes me to reassess my outline at least half a dozen times before the first draft is completed. Some events happen on days or at places that I didn’t initially plan on, or some events don’t happen at all. And that affects the other events that lead to the end of the book. It’s a constantly-changing puzzle that causes me to repeatedly reassess and move forward.

This week was one of those reassessment weeks. I spent half of the week building a calendar for the events of Purged. I found that my initial outline wasn’t enough–so much happens in such a short amount of time that I needed to make a day-by-day calendar to make sure I was keeping track of it all. So I went back through the entire manuscript, scanning for all major events and where they fall in the timeline, then wrote them down. Then I planned for other events that will happen leading to the end of the book.

It was a time sucker. But it was necessary.

So yeah, that’s why it looks like I only wrote a couple thousand works this week. Some calendar reassessment happened. Some writing and deleting and starting over happened. But we’re still moving along. With any luck, this first draft will be done in the next month or two, then I get to spend the rest of the year carving more details into this narrative sculpture.

I can’t wait for you guys to see the end product. In the meantime, please read Foreordained. I promise you’ll like it. Or at last you won’t hate it.