Star Wars vs. Lord of the Rings 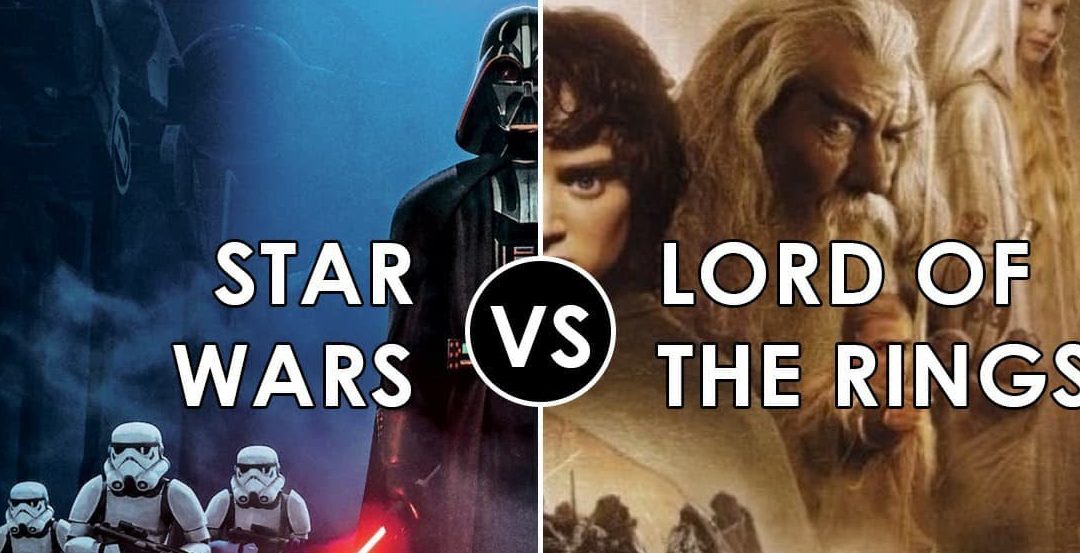 I’m right in the middle of the final battle. Seriously, this first revision has been a great chance to tighten up a lot of aspects of Purged, and it’s shaping into something really special. When this book is done, I’m confident that this will be my best work yet–a more than worthy successor to Foreordained. With any luck, it could be published by the end of the year!

But that’s not what you’re really here for, is it?

Today at work we had a poll on what was better: Star Wars or Lord of the Rings. First off, how dare the asker even pose this question? For me, that’s like choosing between cookies n’ cream ice cream and red curry Thai. I love both things! I don’t want to pick just one! They both exist among the Holy Trinity of Nerddom (along with Harry Potter) and I hate the concept of choosing one over the other.

But if I absolutely, positively, resolutely, unashamedly, restrictively had to pick one…

Not gonna lie, I went into this post to explain why a certain British linguist deserved this trophy, but as I researched it, I realized how stupid this whole enterprise is. Why am I doing this? I’m not going to change anyone’s mind! This is a bunch of unnecessary research to prove a point that doesn’t need to be made at all.

So how about this: I’m about to tell you the ups and downs of each saga and explain why both are awesome.

Hold on to your butts.

May of 1977. Before then, most science fiction movies were the likes of 2001: A Space Odyssey and Close Encounters of the Third Kind. They were sleek and futuristic. Interesting, but not for everyone. Then Star Wars came along.

It blew people’s freaking minds. The special effects. The ship battles. The characters. The Force! George Lucas thought it was going to be a failure when it arrived in theaters. Instead, the world couldn’t get enough of it. He ended up turning it into a trilogy and working with other talented directors to bring his vision to life. And oh, what a vision! From the lightsabers to the speeder bikes to Darth Vader’s earth-shattering “No, I am your father,” Star Wars rocked our worlds. Our buddy George ended up making a lot of money.

You know how, right? Merchandising. Real talk, this is probably Star Wars’ greatest victory. Movies hadn’t really done this before, but Star Wars launched the movie with a ton of swag behind it, including toys, clothes, lunch boxes, you name it. What this did was create a culture–a legion of fans that made Star Wars part of their everyday lives. And we see the fruits of that labor: Star Wars movies are still being made over 40(?!) years later.

Star Wars definitely hasn’t been perfect through the years, though. History shows us that even the OG, trendsetting A New Hope would have fallen apart if it weren’t for Paul Hirsch’s masterful editing and John Williams’ unforgettable score. George Lucas’ original script was kind of a mess, and let’s not forget the prequels, Solo, and Rise of Skywalker. Let’s be honest, guys… Star Wars has let us down a time or two.

Regardless, you can’t avoid the impact that Star Wars has had on pop culture. It inspired an entire generation of filmmakers and gave birth to the Hollywood blockbuster. We even have Star Wars theme parks now!! Face it, we all love Star Wars. And it’s here to stay.

(Note: I’m writing this as I wear one of my Star Wars shirts)

Lord of the Rings

Holy crap, I love Lord of the Rings. It’s so good. It’s so so so good.

J.R.R. Tolkien, a professor at Oxford University, had been working on The Lord of the Rings for over a decade after the successful publication of a little number called The Hobbit. He took his time. And since he did, the lore of Middle Earth grew into a staggeringly vast and cohesive world teeming with life and magic. That set the stage for Frodo and the One Ring.

At first, reception was mixed but sales were positive. Some critics hailed it as a masterpiece while others (even some of Tolkien’s friends) thought it was too long and sluggish. But Tolkien’s work still found its audience, mostly among nerds and hippies.

Adaptations followed. There was an animated movie of Lord of the Rings back in the seventies. It’s not good, but not as bad as the abomination known as the Star Wars Holiday Special. But then the Gods of Fantasy smiled upon the world decades later when Peter Jackson directed the live-action Lord of the Rings trilogy.

Jackson’s versions of The Fellowship of the Ring, The Two Towers, and The Return of the King were reverently faithful to the books. Not only that, but they’re also three of the most acclaimed movies ever according to IMDb. Absolutely masterful. Emotional. Exhilarating. Poignant. Unbearably long, for some. The three of them gathered a total of 30 Oscar nominations and 20 wins, 11 of which went to The Return of the King.

Let’s go back to the books, though. If I’m being honest, they’re a slog. I tried reading them when I was a teenager and just didn’t have the patience for them. It wasn’t until I graduated college and acquired a taste for classic literature that I found them bearable. But not only are they bearable to me now, I love them. Tolkien describes his world with a gentle poetry that I’ve never seen in another author. It’s beautiful, refreshing, and thoroughly engrossing.

Last but not least, the impact of The Lord of the Rings on nerd culture is absolutely immeasurable. Tolkien established himself as the godfather of modern fantasy with the way he portrayed everything we knew from fairy tales. It’s not a stretch to say all fantasy we currently enjoy eventually comes back to Lord of the Rings, whether it’s Dungeons & Dragons, Game of Thrones, The Elder Scrolls, or even freaking Harry Potter. It’s all there. Tolkien paved the way.